I usually post movie-related topics, but I’m also an avid reader. There’s this great book I just have to recommend.

Poies: A New Beginning by Paul Worthington is absolutely enthralling. A new type of fiction, Worthington has designed the poie: poems+stories=poies. It has an eclectic quality to it, but every poem (or poie) is great.

It’s on B&N and Amazon; I got mine’s from the former on my Nook. 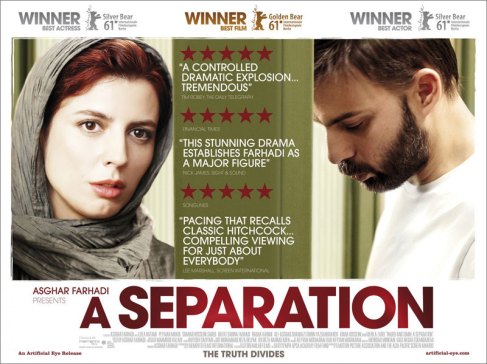 A Separation, directed by Asghar Farhadi, handles a complicated subject matter with piercing accuracy and realistic storytelling. The movie focuses on the life of Nader and Simin, an Iranian married couple who are on the brink of divorce. Simin desires to move out of war-torn Iran with her 11 year old daughter, looking for brighter opportunities elsewhere; her husband, Nader, remains to take care of his Alzheimer father. He hires Razieh, who is pregnant and financially struggling, to care for his father. When Nader one day notices his money missing, Razieh is the first to blame, to which she strongly objects, proclaiming her innocence. When he forces her out the door with a push and Razieh later has a miscarriage, director Farhadi begins to craft the masterpiece A Separation is.

What makes A Separation the classic it has become is by how perfectly realistic the story is; the acting is superb (Nader and Simin’s “separation” is so chillingly real their performances deserved some kind of Oscar nod), the plot flows well (every challenge is carried with suspense and anticipation, but is handled satisfactory), and the character development is brilliant (we see how characters grapple with their demons with moving passion, not overt sentimentalism). The cinematography is not amazingly impressive, but the camera accurately portrays modern Iran.

Overall, this movie definitely deserved the Academy-Award win it received. Unlike the title, the audience cannot separate themselves from the movie emotionally or mentally.