RandomFilmBuff has been M.I.A. for quite awhile, but we are not shut down!

We’ve been busy working on other cool projects (screenplays! books! ), but we have to update you guys on all the exciting action.

Other than the projects mentioned above, one of our biggest ventures has been launching a t-shirt company.

Yep, you read that right. A t-shirt company.

We would like to introduce, Snaggy Tees, the new t-shirt company that strives to give the coolest tees around to the world. Our products range from inspirational and motivational to straight-up funny and eye-catching.

It’s our dream one day to be as big as the Life is Good brothers, or even to overtake Snorg.com. And honestly, we plan on doing exactly such.

Of course, there’s much more to come. Our t-shirts are

AND BETTER THAN EVER…

(As you can tell, we’re still kind of “cinematic.”)

Come on over, take a look, snag a great deal! We’re happy to welcome you into the SnaggyTees family.

I hate the term “classic.” It’s insane for one group of people to declare that certain films and novels will forever be masterpieces. Why shove clunky books down poor schoolchildren’s throats and proclaim certain films are “must-sees” to any film buff? If a piece of art is so special and great, shouldn’t it be able to stand and thrive on its own without people constantly shoving it forward? Though critics, professors, and misguided viewers and readers like to toss around the word “classic” too, why is one major entity – schools – stating what should be classic for the entire world? You HAD to read To Kill a Mockingbird in 9th grade; any serious movie buff HAS to see Psycho or Taxi Driver or Citizen Kane, etc. Alice in Wonderland, Pride and Prejudice,The Great Gatsby, even children’s books are stamped as classics. Where the Wild Things Are is probably one of the worst kid’s books I’ve read – but since a bunch of people said, “CLASSIC!”, people go out in droves and buy the book or film or any piece of art declared as a beloved classic.

Perhaps these novels and movies were magnificent for a different era – the current generation is to produce new “classics”, not artistry that has died (or should have died) a long time ago. Because someone does something first does not make it wonderful, especially if a host of other people did it entirely better.

So why in the world did I read Jane Eyre?

Other than it was free on my Nook and, (listen here) REQUIRED reading for school, I didn’t want to.

“But Alley, was it good, overrated, masterful? Does it deserve to be called a “classic”?”

But let’s take it slow: what does Jane Eyre do right? For one, the strong willed heroine Charlotte Bronte presents is a breath of fresh air – even for the 21st century. Jane does not  take any stuff – blunt honesty and strong spirits is the name of her game. It might be more normal to see the ‘strong woman’ type in entertainment today, but this well-rounded female character is essential for women for any era. The writing is absolutely enthralling – Bronte chooses words that zooms the reader right into the scene. The characterization and diction is wonderful, a symphony of gorgeous words.

Wow, that was quick. Now for the bad…

Honest to God, though the writing is pretty, at least half of this novel could have been chopped off, two-hundred pages at minimum. SO MUCH of it is unnecessary purple prose – grandiose descriptions already detailed in the before paragraph. This is not setting up a scene – this is overindulgence to the max. Bronte also gives a typical, ‘happily-ever after’ story in Jane Eyre. It’s not deserving of a detailed synopsis, so here’s the rundown: poor girl an orphan in a rich family; poor girl a governess to a rich master; poor girl wife to rich master; poor girl just poor and homeless; poor girl suddenly made rich girl; rich girl marries rich master.

The relationship between Jane and Mr. Rochester is sweet, touching, then BAM!, almost verging on a saccharine mess. Throw in some contrived plot devices and you have a “classic.”

But perhaps we’ve learned a lesson here. What may be good for you, may be horrible for another. Only the person can decide what’s “classic” for themselves.

My, oh my. Does this movie have it all… Rushed pace, unneeded scenes, important scenes given the ax, and since we’re in England…Judi Dench!

Pretty cinematography cannot save this movie. Is it a dark thriller, a romance, a character study, etc.? Because this film doesn’t balance the three elements well like it’s source novel does.

I sit and wait; I’m in the perfect seat. I tap my feet to the pre-previews beat.

I am the only one in here. How odd. I halfway listen to the ‘Behind The Scenes’ footage while I nod.

“I KNOW RIGHT!” An intruder! She waddles in on her cellphone, scans the chairs looking for her throne.

Screaming into her cellphone. I scream inside. And what’s that smell?

She readjusts herself carefully. I am in hell.

The room goes dark. The MPAA warns this preview is for grown-ups alone.

She says goodbye for the 1000th time and presses ‘End Call’ on her phone.

Yes, I can finally enjoy…

She zips open her suitcase – I don’t think that’s a purse – and snatches the noisiest, loudest chip bag in all of history and under my breath I curse.

One meaty hand on the left, five sausages on the right. She smacks the chip bag and POP! chips dance in the air, blocking my sight.

A giggle and another odd smell. She slams a handful of chips down her throat.

I want to put my hands around her throat.

She whips out her cellphone and presses Messages.

Oh my God…she’s about to text.

The movie is starting. What did I go see? For all I know, there’s a whole new movie in front of me!

I think I already told you I was in hell.

The lights come back on. My torture can end. She leaves as quickly as she came in.

I peer over the seats. Chips, chips, chips litter the chairs. Reminiscences of her are everywhere.

So please moviegoer, shut up, eat quietly, and crap before you leave home, and don’t ever, ever, ever let this be you.

Or the theater might just have to jump on you.

Ever had a horrible moviegoing experience because of that one annoying audience member? Leave your story in the comments. 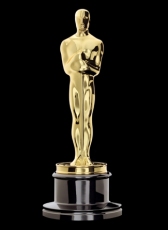 The two don’t seem to match.

Really. The Academy has to hate Leo. From playing a mentally challenged youth to an old guy in a dress (I’ll explain this one later), DiCaprio’s performances have been too great to ignore by anyone—well, almost anyone. 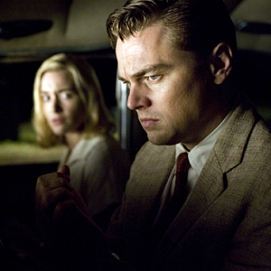 Revolutionary Road- Miserable suburban father and husband. Has an affair. Screams a lot with his wife.

I’m going to be unpopular for a moment and honestly say I really enjoyed this one. Though some people seem to feel the “plot doesn’t really go anywhere”, no one can ignore Leo’s performance. DiCaprio jumps right into Frank’s depressed character—his seemingly perfect, crumbling life is powerfully represented by Leo. The passionate rage and overwhelming grief also mixes well to make you significantly depressed after watching the film (just kidding).

What’s Eating Gilbert Grape-  I sometimes forgot Leo was acting in this film. The subtle hand and body movements, the near perfect voice inflection, and the overall metamorphosis is shocking—but believable. Playing a mentally retarded teenager without being insulting is not an easy thing to do. (are you listening Academy?) 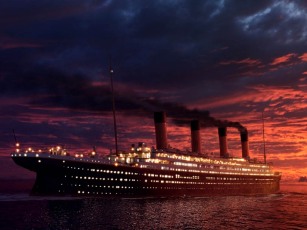 Titanic- Why is there a picture of the Titanic and not Leo? Well, this wasn’t exactly Leo’s movie. It was a time for CGI to shine. Yes, the whole relationship between Rose and Jack is beautiful and charming and emotional (I still tear up at the end to this day), but his performance wasn’t phenomenal. So as much as I hate to admit this – the Academy was probably right on this one. 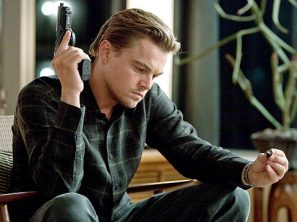 Inception-  It may seem like I’m contradicting my original point, but the Academy was justified with Inception. Christopher Nolan’s innovative concept is what wins this movie. Definitely, Cobb’s reaction to Mal’s suicide is a heartbreaking scene, but DiCaprio’s acting takes a backseat to the film’s plot. 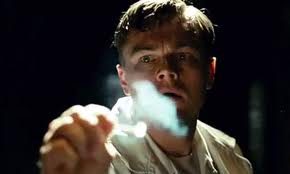 Shutter Island- G-R-E-A-T. The movie’s fascinating story and the constant suspense would have less of an effect without Leo in the main role. He convinces the audience so well – I felt his confusion, fear, and devastating pain, especially in that haunting final scene.

The Departed- One word can sum up DiCaprio’s performance—real. His emotions are stirring and real; the New York accent is real; the body language, dialogue with others, vulnerability, etc. – everything about his acting dripped of realness. A running line in the movie is, “You have to take it”. Leonardo takes his character and runs with it.

Catch Me If You Can- It’s pretty ironic how much the character Frank is actually related to Leo’s acting skills: As Frank embodies the roles of pilot, doctor, and lawyer, so does DiCaprio bring every one of his character’s to life, and Catch Me If You Can is no exception. However, it is understandable why the Academy did not acknowledge him on this film: Catch Me If You Can was more of a step for Leo to be considered as a serious actor; a way to escape the ‘Titanic heartthrob’ hype. Though charming and believable, his performance was short of outstanding.

J. Edgar- I don’t know about you, but dressing in women’s clothing and wrestling then kissing your character’s best friend is hard – especially in front of a major film crew and eventually millions of people. But Leo does it with dignity (for those who haven’t seen the movie, it’s not as weird as it seems). DiCaprio’s depiction of the country’s most powerful FBI director is powerful itself (shame on you Academy). 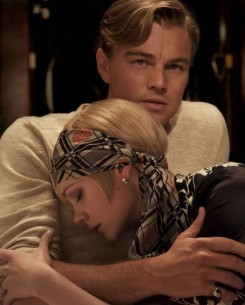 Great Gatsby / Django Unchained- These two are tricky. Both have directors who’s styles are distinct (Baz Luhrmann and Quentin Tarantino, respectively), but their movies can vary from being incredible to absolute crap. Gatsby takes place in the 20’s, and Django in the 19th century, and Leo can handle different time periods well (Revolutionary Road and J. Edgar occurred in the 50’s). I’m sure the emotion is going to be there, I just hope the directors don’t veer DiCaprio somewhere he doesn’t need to be.

The Academy is not absolute villain or total angel in relation to the whole DiCaprio-deserves-an-Oscar issue. Sometimes they are accurate, other times make you ponder what they were smoking. Hopefully, one day in the future, we won’t have to see this face made again at an awards show. 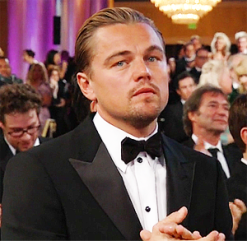