Don’t you love it when you see a good film? I mean, a really good film? It’s as if you can almost forgive Hollywood’s slew of crap and truly appreciate a really great movie. Well, that’s just the case with Lincoln. If one can overlook the temporary injections of corniness, they can witness a beautiful, passionately and wonderfully acted, and an even charming film blossom before their very eyes.

Lincoln follows the 16th President and his cabinet’s journey to establish the 13th Amendment; you know, the one that gets rid of slavery? Obviously, it’s kind of a big deal, and some people don’t like it. Abraham Lincoln must convince his nation to ratify this measure, all while attempting to bring the Civil War to a close, grieve with his wife Mary over the death of his son Willy, raise and love his other two boys, and deal with a bunch of old, grumpy white guys.

In short, Spielberg’s still got it. All of these topics are handled gracefully and flow smoothly with each other, also managing to paint a touching portrait of Lincoln. (Lincoln’s kind of like the Grandpa you wished you had, who would go off topic and tell funny stories, then somehow tie that story into his preceding point, and look really cool and wise.) While Spielberg’s direction is great (one is always aware of the camera, but it seems more like a warm invite than an irritating awareness), let’s give a round of applause for Tony Kushner, the screenwriter. It takes great skill to construct an accurate and pleasing portrait of Lincoln and his presidency. And the assassination: tactful, despite how weird that may sound. The death of America’s President is sad, yet bittersweet.

And wow, I forgot to mention the acting; that’s just how good it is. Everyone falls completely into their characters, and I bet you $100 Daniel Day-Lewis is winning that Oscar.*

Lincoln is one of the best films this year, no doubt about it. 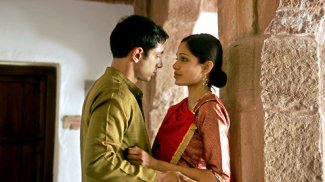 And of course, the great moral message: Let someone treat you like garbage for a long time, then when you’re sick of it, kill them. Then kill yourself. So empowering!